Chapel Hill, NC – When H. G. Jones died on October 14, our state lost a key connection to its history as well as a prime and positive, but all too rare, example of dedicated and unselfish public service.

For many years Jones was my neighbor. I admired the fruit tree in his front yard across the street from my house on Country Club Road in Chapel Hill. It was an uncommon variety of apple named Mattamuskeet. Its small, dark-colored fruit was not as alluring as the flashy golden varieties in the grocery stores, nor was its flesh as super sweet and tasty as the varieties we have come to love so much. Mattamuskeets are tough and tangy, part of the adapted attributes that equip them to withstand the challenges of storage in the warm and moist conditions of the coastal plain of North Carolina. For that reason alone, it is treasured by people who live in Hyde County near the lake that shares the Mattamuskeet name.

According to legend, the seed of the first such tree was found ages ago by Mattamuskeet Indians in the gizzard of a large goose.

Walking by Jones’s house during the fall, I would sometimes steal a few apples that had fallen. Then I would make apple cobbler, take a serving to Jones, and ask for his forgiveness for my theft. He always forgave, always with a smile. 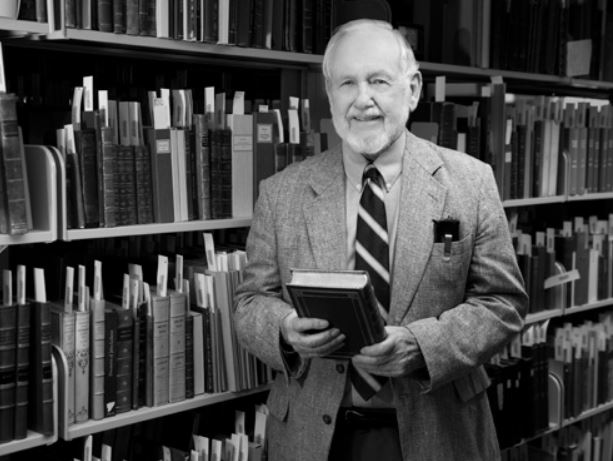 How that Mattamuskeet apple tree got to Jones’s yard is one of my favorite stories.

In his role as director of North Carolina’s Department of Archives and History and later as curator of the North Carolina Collection at the UNC-Chapel Hill library, Jones was often asked to travel to various parts of the state to lecture to local groups about their community’s history. Usually, the group offered him a small honorarium. He always refused, explaining that he was a public servant and had already been paid to promote the history of our state.

Although he always refused any monetary payment, it came to be known that he would accept an apple pie, if one were offered. So it became customary for local groups to present him with a pie after every talk.

Once, he traveled to Hyde County to give a talk. Surprisingly, no pie was presented, and Jones came back to Chapel Hill empty-handed and a little puzzled about the missing pie.

Several days later, when he came home from work, Jones found a new tree in his yard. It had been planted by the folks from near Lake Mattamuskeet, and as it grew and bore fruit, it was a living monument to Jones’s unselfish and loving service to the people of North Carolina.

In addition to many talks throughout North Carolina, Jones spread the knowledge of state history in countless ways including, for 17 years, a weekly newspaper column, “In Light of History,” which explained our history in words we could understand. In the same spirit, he wrote and assembled illustrations for “North Carolina Illustrated, 1524-1984.” It is my favorite book to put our state’s rich early history in perspective.

Jones projected a modesty that complemented his commitment to service. Every now and then, though, he let pride shine through. Once, I asked him to help me to get the Country Club name of our street changed because it made people think we were rich, even though it is nowhere near a country club. Jones said he would oppose any such change as a matter of principle. “And besides,” he said grinning, “I don’t mind if the folks in Caswell County, where I grew up on a tenant farm, think that I now live near a country club.”

H.G. Jones, like the fruit of the Mattamuskeet tree, was a rare and precious apple.

Georgann Eubanks – The Month of Their Ripening

Beloved NC author Georgann Eubanks’ new book takes readers on a tour of the state’s heritage foods & when & how & where they are eaten. Ms. Eubanks sat down with host DG Martin at the annual Bookmarks Festival in Winston-Salem.

Authors TR Simon (Zora & Me), Tom Santopietro (Why To Kill A Mockingbird Matters), & Charlie Lovett (150thAnniversary Edition Alice’s Adventures In Wonderland) joined host DG Martin at the annual Bookmarks Festival in Winston-Salem for an in-depth conversation about the books The Great American Read list that resonated with them & why they are still impactful & relevant today.

Congratulations are in order for the one and only Anthony Vesce! Breaking and setting records for Seaforth High School with the help of a young and hardworking O-line. What record will he break next???? 🏈 🥇🏈🥇 Let’s go Seaforth Football. ... See MoreSee Less

LOL! 🤣And the Pittsboro town board is considering passing a mask mandate? 🤦‍♂️🤔https://www.foxnews.com/politics/san-francisco-mayor-london-breed-maskless-nightclub-mandate-fun-police ... See MoreSee Less

San Francisco Mayor London Breed remained steadfastly defiant about her behavior after she was photographed at a city jazz club dancing and singing without a mask on earlier this week despite a city m...
View on Facebook
· Share

Jon Sanders, senior fellow in regulatory studies and research editor at the John Locke Foundation, discusses the importance of natural immunity and its role ...