Raleigh, NC – Governor Roy Cooper, a Democrat, is one of 16 governors who holds only virtual press briefings without reporters in the room. He has scheduled one for 3 p.m. Tuesday, December 8, when he’s expected to issue tighter coronavirus regulations.

After nine months of the coronavirus pandemic and shutdowns, Cooper is in the minority. The other 34 governors use social distancing, mask requirements, and temperature screenings to allow in-person press briefings.

But the breakdown between the two approaches isn’t always partisan.

New York and New Jersey both offer reporters in-person access to their Democratic governors. But Republican governors in Utah and Alaska host only virtual press briefings.

Carolina Journal contacted the offices of the governors of all 50 states the last week of November. It found 68% of governors allow some reporters to be present with various safety measures. Some governors held meetings outdoors to reduce the risk of virus spread. Others limited attendance and used large auditoriums to allow space among reporters. 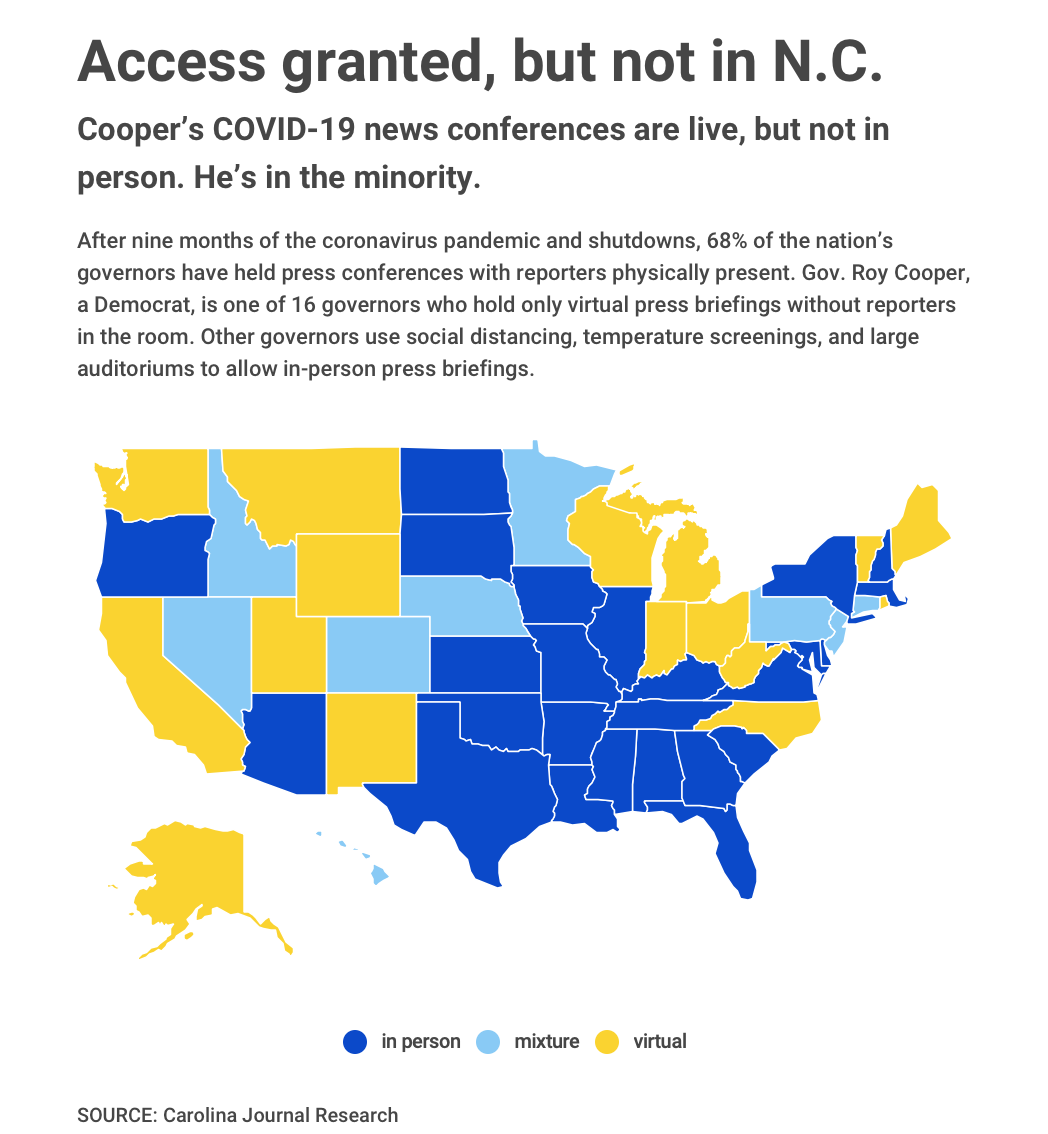 General Assembly leaders have scheduled a few press briefings during the pandemic. They’ve either used the legislative auditorium, with plenty of space among reporters, or met with reporters in open areas of the Legislative Building, allowing room for social distancing.

“Obviously, elected officials do as much as they possibly can to prevent having to answer awkward questions,” said Andy Taylor, professor of political science at N.C. State University. “COVID has brought on a difficult challenge. On one hand, it gives them the opportunity to keep reporters out. But, on the other, there’s never been more of a need to communicate directly with the people they serve.”

Virtual meetings help boost the public’s access, but they come with a cost, says Brooks Fuller, director of the N.C. Open Government Coalition and Sunshine Center.

“What you’ve seen is a mixed bag of results,” Fuller said. “It can diminish access because you lack the in-person energy of a press conference and the ability to ask followups. It can be harder for reporters to aggressively follow up on important issues. So there’s a tradeoff.”

In July, Cooper came under fire after reporters complained he shut them out of questions, including WBTV’s chief investigative reporter Nick Ochsner, writers from the North State Journal, and WBT Radio’s Brett Jensen.

He has taken two questions from Carolina Journal since the briefings began in March. Department of Health and Human Services Secretary Mandy Cohen regularly answers questions from CJ when she, rather than the governor, leads briefings.

“Protecting health and safety should not mean limiting press access, and virtual briefings should not be used as an excuse to screen questions or outlets,” the national Radio Television Digital News Association tweeted in July. “Please refer to our briefing guidelines, @NC_Governor.”

In the past, Cooper has replied that he is pursuing the safest option. His team did not respond to a request for comment.

Fuller argues that a hybrid of virtual and in-person press briefings is the best way to increase governmental transparency after the virus abates.

“We should follow public health guidance and maintain public access,” Fuller said. “We’d like to see as much access to government as possible. And with technology available, it is possible. Going forward, a hybrid is the ideal.”

See the list of states and their governors’ approaches: