Chapel Hill, NC – Is there some way to help President Trump recover from the damage caused by his comments relating to events in Charlottesville and the future of Confederate monuments? Perhaps he could issue a statement of his position following the model of the classic “If-by-Whiskey” speech given by Noah Sweat, a Mississippi legislator, in 1952 on the controversial question of legalizing the sale of liquor. In that speech, Sweat passionately and convincingly argued two opposing sides of a serious issue.

If our president followed that model, he could explain his position as follows:

My friends, I had not intended to discuss this controversial subject any further. But as you know I do not shun controversy. On the contrary, I will take a stand on any issue at any time, regardless of how fraught with controversy it might be. You have asked me how I feel about the removal of Confederate monuments. All right, here is how I feel about them and the proposals to take them down. 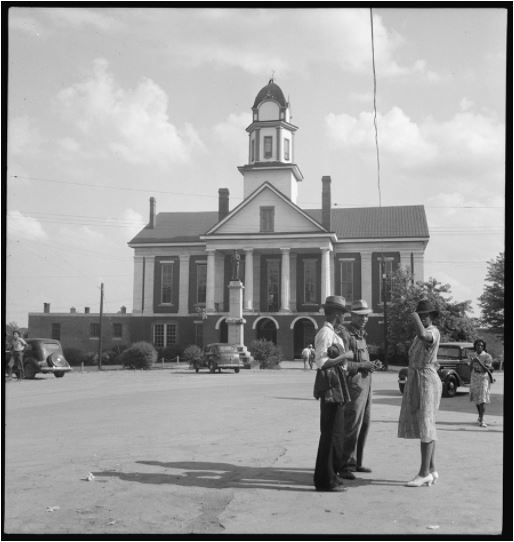 Dorothea Lange’s 1939 photograph of downtown Pittsboro with the courthouse & confederate memorial in the background.

But, if when you say Confederate monuments, you mean those structures that glorify the Confederacy and its legacy of slavery; if you mean monuments erected long after the end of the Civil War that were part of efforts to support white supremacy and symbolize the white men’s duty and right to rule and which gave legitimacy to the Jim Crow regimes that segregated nearly every aspect of life; if you mean those monuments that have made the black people who pass by them every day walk in the shadows of edifices that honor and glorify those who enslaved, beat and slaughtered such people’s ancestors and who supported  a bloody Civil War to protect the inhumane institution of slavery; if you mean those monuments that are constant reminders of institutional racism, segregation and slavery and have become symbols of modern white supremacy, the KKK, and neo-Nazism, then certainly I am against Confederate monuments and they must be removed.

The complete text is below:

If when you say whiskey you mean the devil’s brew, the poison scourge, the bloody monster, that defiles innocence, dethrones reason, destroys the home, creates misery and poverty, yea, literally takes the bread from the mouths of little children; if you mean the evil drink that topples the Christian man and woman from the pinnacle of righteous, gracious living into the bottomless pit of degradation, and despair, and shame and helplessness, and hopelessness, then certainly I am against it.

But, if when you say whiskey you mean the oil of conversation, the philosophic wine, the ale that is consumed when good fellows get together, that puts a song in their hearts and laughter on their lips, and the warm glow of contentment in their eyes; if you mean Christmas cheer; if you mean the stimulating drink that puts the spring in the old gentleman’s step on a frosty, crispy morning; if you mean the drink which enables a man to magnify his joy, and his happiness, and to forget, if only for a little while, life’s great tragedies, and heartaches, and sorrows; if you mean that drink, the sale of which pours into our treasuries untold millions of dollars, which are used to provide tender care for our little crippled children, our blind, our deaf, our dumb, our pitiful aged and infirm; to build highways and hospitals and schools, then certainly I am for it.

The text of Noah Sweat’s “If-by-Whiskey” speech is available at https://en.wikipedia.org/wiki/If-by-whiskey

Author John Grisham discusses and reads this speech at: