On average, an estimated 148 people in the United States die each year from accidental exposure to carbon monoxide produced by consumer products such as gas furnaces and ranges. Because carbon monoxide alarms are a critical line of defense against accidental poisoning, it’s imperative that they work properly.

Consumer Reports is unaware of any death or injury linked to these three models.

We test CO alarms for their sensitivity at different concentrations of carbon monoxide because even a relatively low concentration can be dangerous if the exposure is over a long enough period of time.

Two of these alarms failed to sound when exposed to carbon monoxide at a concentration of 100 parts per million: the GoChange and the NetBoat. An alarm should sound within 40 to 165 minutes at that level of exposure.

Additionally, the GoChange alarm failed to sound when exposed to carbon monoxide concentrations of 400 parts per million—a level at which an alarm should sound within 4 to 15 minutes. The NetBoat model did sound an alarm at this higher concentration, but did so after an average of only 30 seconds, instead of the recommended 4 to 15 minutes, which poses a different risk.

“Models that alarm too quickly make it more likely that a consumer would remove the batteries or disconnect the alarm to stop nuisance alarms,” says Bernie Deitrick, Consumer Reports test engineer. “That can leave people unprotected in dangerous situations.”

All three models have been rated Don’t Buy: Safety Risk, and Consumer Reports has notified the Consumer Product Safety Commission (CPSC) of its findings, as well as Amazon and eBay.

After we alerted eBay, the company told us that based on our report it had removed the GoChange listing and requested that the seller contact any buyers who may have purchased the alarm. The company also told us that it was unable to find any other listings for the GoChange alarm and said that consumers who believe they purchased one should request a refund directly from the seller. Alternatively, eBay has a money back guarantee.

Amazon told CR that the models we tested had been removed from its website, as had similar-looking models we pointed out that did not list that they met important safety standards. Amazon’s official policy prohibits the sale of carbon monoxide alarms that haven’t been tested to the standard, and the company indicated it would work with consumers who may have purchased these alarms under the terms of its return policy. 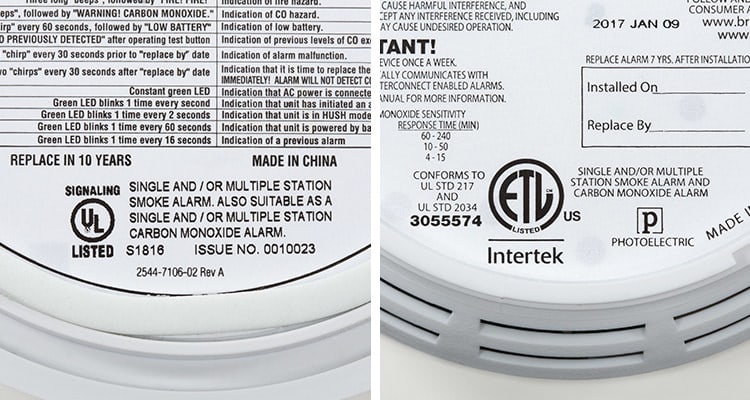 The label of an alarm tested by UL carries the lab’s logo (left). ETL, another lab, specifically references UL-2034.

Labels to Look For

All three of the carbon monoxide alarms that failed CR’s tests appear similar on the outside, and lack a brand logo on the alarm itself and on the packaging. None carry a logo indicating that they’ve been tested to meet UL’s carbon monoxide alarm standard (UL-2034), which specifies a range of appropriate response times at various concentrations of CO in the air.

A legitimate alarm can be certified by UL or labs other than UL to meet the UL-2034 standard. The certifying lab’s symbol will appear both on the packaging and on the alarm itself—typically on the side that mounts to the wall. UL told CR in an interview that it’s rare for a carbon monoxide alarm to possess a counterfeit UL symbol.

“If your alarm does not carry certification that it has passed the UL standard’s requirements, we recommend that you replace it either with one that does or with one that has passed our tests,” say Deitrick. “All the tested models in Consumer Reports’ ratings that are assigned an overall score will reliably alert you to dangerous levels of CO, without triggering nuisance alarms at lower levels.” What distinguishes recommended models, explains Deitrick, is that they alert you earlier within the appropriate time window.

CR’s top-rated standalone CO alarm is the First Alert CO615. First Alert also makes CR’s top-rated interconnected CO and smoke alarm, the OneLink SCO501CN, which syncs with all the other compatible alarms in your home. Interconnected alarms provide an extra level of protection: If CO is detected in the basement, the alarm in your second-floor bedroom will also sound, giving you a more immediate warning.

In addition to owning functioning carbon monoxide alarms, it’s important that you place them correctly. Consumer Reports advises placing alarms on every level of your home, including your basement, and near (not inside) attached garages. More information on proper placement and tested models is available in our CO alarm buying guide.

I signed up for T-Mobile's $50 unlimited home internet service. Here's what happened

Finally, a low-cost alternative to cable. But would it be fast and reliable? I decided to find out.
View on Facebook
· Share

Thank You from The Chatham County Council on Aging. We have plenty of pet food for those in needchathamchatlist.com/2021/02/24/thank-you-from-the-chatham-county-council-on-aging/ ... See MoreSee Less

Thank You from The Chatham County Council on Aging

I recently put a plea in the chatlist for pet food for the Seniors we serve.I just want to say thank you to all the people who enthusiastically and selflessly answered my plea with their overwhelmi...
View on Facebook
· Share

I got my first Covid vaccination on Tuesday. I felf a little sluggish the rest of Tuesday. When I got up Wednesday, I had the same exact symptons as the original covid bout: intense headache, fever, no appetite, and thirst.. I was better yesterday. I had a slight headache when I got up, but that went away. My arm has a red area about an inch and a half diameter, and it itches. ...chathamchatlist.com/2021/02/24/1st-shot-covid-side-effects/ ... See MoreSee Less

I got my first Covid vaccination on Tuesday. I felf a little sluggish the rest of Tuesday. When I got up Wednesday, I had the same exact symptons as the original covid bout: intense headache, fe...
View on Facebook
· Share

Centurylink catches so much H that you should know of this example of good next day service. Now 31 hours in and the sound is better but still have interruptions - Oops. Something went wrong! or This video is taking longer to load than it should. Pardon the inconvenience. Low level satellite service company Starlight may be here soon. Maybe around $100 a month after a $500 installation fee....chathamchatlist.com/2021/02/24/centurylink-service-catches-so-much-h-that-you-should-know-of-this... ... See MoreSee Less

Centurylink catches so much H that you should know of this example of good next day service. Now 31 hours in and the sound is better but still have interruptions – Oops. Something went wron...
View on Facebook
· Share

So glad to hear you want to learn about fishing. Now is the time to get gear and start planning because around March-April is the time when you'll hear about "take-a-kid-fishing" eventschathamchatlist.com/2021/02/24/so-glad-to-hear-you-want-to-learn-about-fishing/ ... See MoreSee Less

So glad to hear you want to learn about fishing

Hello, so glad to hear you want to learn about fishing.Now is the time to get gear and start planning because around March-April is the time when you’ll hear about “take-a-kid-fishing&#...
View on Facebook
· Share

Good day,The website to check availability would not load in 90 minutes for me, so used the chat feature and this is the phone number to call if you want to learn if you have the service.1-844-839-5057. Not available on the South West side of Siler City, but I am now on the waiting list.Thank youAnn Zimmerman Date: Thu, 18 Feb 2021 10:18:03 -0500 (EST)From: Sarah Ann ZimmermanSubject: home internet TMobile numberchathamchatlist.com/2021/02/24/check-to-see-if-you-can-get-t-mobile-home-internet/ ... See MoreSee Less

Check to see if you can get T-Mobile home Internet

Good day,The website to check availability would not load in 90 minutes for me, so used the chat feature and this is the phone number to call if you want to learn if you have the service.1-844-839-...
View on Facebook
· Share

Pittsboro, NC – Three of the five Chatham County high school basketball teams won their first round tournament games and get to move onto round two.Story is here Date: Wed, 24 Feb 2021 07:14:...
View on Facebook
· Share