Pittsboro, NC – The installation and tie-in of a new waterline under Lystra Road in the sinkhole repair location ended up creating discolored, but safe, water in some North Chatham households over the previous weekend. Chatham County Utilities explains how this occurred and how it has been addressed. 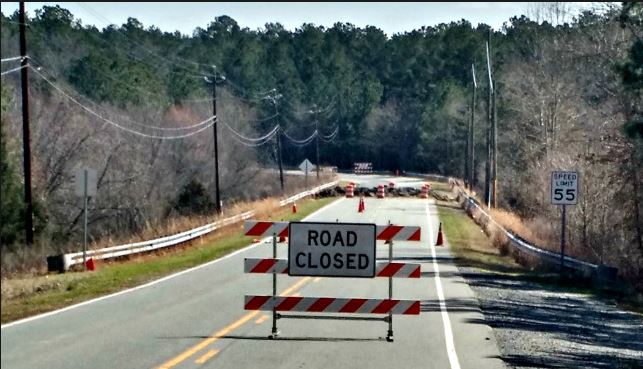 NCDOT began work last month to repair a section of Lystra Road eroded by a large sinkhole. The work required NCDOT to install a new waterline below the road. On Wednesday, April 27, the new waterline was installed and tested for pressure and bacteria, with test results in compliance with state requirements.

On Friday, April 29, NCDOT did the tie-ins to the new waterline under Lystra Road. In preparation, Chatham County Utilities shut down water service to a section of the north water system. Water service continued in other north system areas, but with lower pressure than usual due to changing the pressure controls to the elevated tanks instead of the booster pumps at the water treatment plant.

Late on Friday, April 29, NCDOT completed its work and Chatham County reopened the valves to restore water service to all. They flushed and retested the water quality. In the process, the fluctuation in water pressure caused discoloration of the water in some households. The water supply continues to meet state health requirements, but the discoloration can be very concerning to residents.  For some residents, the discoloration continued over the weekend and into Monday.

What caused the discoloration?

The water pressure fluctuations likely caused some expected sediment buildup of iron oxide and minerals to break loose from the inside of the iron pipelines. This sediment discolors the water for a while until fully flushed out of the system. The older iron pipes, more likely to have sediment accumulation, are located mostly in Governor’s Club and Fearrington Village, which were the first areas to report discoloration.

Utilities have no way of knowing where sediment has accumulated in the older pipes, so it is very hard to predict the effect of pressure changes.

What is being done now?

County employees have been working diligently since last Friday to flush fire hydrants and have seen tremendous improvements throughout many parts of our north system. They continue to test the water to verify that it meets state requirements.  Chatham County Utilities has alerted the Public Water Supply Section of the North Carolina Department of Environmental Quality about the situation and the county’s action plan. They have confirmed that we have taken the right steps. We will continue to flush the system as much as necessary to remedy the situation as quickly as possible.

In keeping with the NC Public Records Law, e-mails, including attachments, may be released to others upon request for inspection and copying.